As Trump said in his departing address, he was an outsider to the D.C. Beltway. Therefore that alone made him a target, all the more so by his overt defiance of Comey and the Company of Intel Agencies. As that memorable quote by the current Senate majority leader Chuck Schumer on intel agencies getting Trump "six ways from Sunday."

The problem though in my estimation that has led to the current push toward shut down on the freedom of speech and even overt calls for reeducation of the deplorable rabble, is that Trump himself was too entangled with the miserable likes of Pompeo and Bannon.

The LaRouche movement and others, myself as well, had rightly exposed the Saudis and British Intelligence as behind Al Qaeda's 9/11 World Trade Center massacre. The Pompeo claim that Iran is behind all Islamic terror is a lie. Trump almost from day one of his Presidency went to Saudi Arabia, next named Jerusalem as the capital of Israel and engineered via Pompeo and alliance with the Sunni Wahhabi feudalists and Israel. This fuse has been lit due to the placating of the loony American Armageddonists version of the second coming.

The case of Steve Bannon and the Henry Jackson, English Speaking Union is another problem that has seeded yet another potential for an outbreak by miscalculation with China.

Now, we have the Clintonistas with their unfinished business with their Russian friends... Hillary recently was quoted that Trump probably called Putin to get and OK for an insurrection (!)

And yet, there may be a few forlorn shoots that may not die of canker. I must say that I am particularly delighted that nuclear rocketry for a Mars colonization mission may be afoot (even

Rolls Royce and Elon Musk may be partnering as rumor has it.) And it has just come to my attention that there is a proposal to set up a human colony in the orbit of Ceres. This of course should be named in honor of Riemann's immortal teacher Karl Gauss.

Posted by Thingumbobesquire at 3:43 PM No comments:

The Truth Will Set You Free 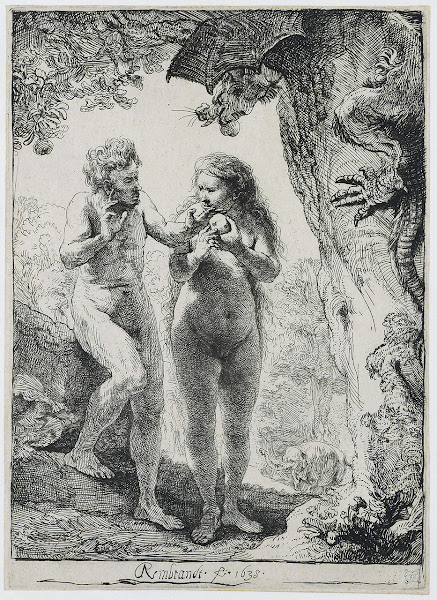 I am hopeful, dear reader, this etching of Rembrandt's Adam and Eve will not be whited out by the "AI" bots. However, please refer to an image if so that links here. This posting will refer to this image as a standard for conveying the dramatic irony of truthfulness and beauty.
If you direct your gaze to the face of Adam what do you see? Like the many self portraits of Rembrandt, what I cannot but marvel at is a soul amidst unrest and mental dilemma. Leonardo and Raphael managed the like within the confines of the prescribed ideal form of human nakedness. (Leonardo, in fact, in his notebooks made clear that the artist should not be so entranced with his own image that it be taken as a model for this ideal.) However, Rembrandt did not adhere to the said stylistic  injunction of the day.
What is the political reality of today's affairs? If we, like Rembrandt, were to dare to lay bare all in its stark humanity in truthful forms, perhaps less than accepted mode of performance art's model of popular entertainment?
We have, since our acquiescence to a monstrous lie, been living in mental terror of the evil geopolitical framework of mutually assured destruction. The lie was that it was necessary for Truman to assent to the dropping of the atomic bombs on Hiroshima and Nagasaki to end WWII. Ever since that point, the psychological framework for the future of humanity has been dictated from an embedded and quite viciously evil oligarchy.
I, and my former comrades, promulgated a strategic option to end this deliberately imposed psychological warfare that came to be known by the term of belittlement engendered through the control of the mass media by that same oligarchy as "star wars." Why and how was this proposal for ending the reign of terror through mutual collaboration of developing technologies based upon new physical principles that would spill over to revive our wrecked and looted industrial economy defeated?Essentially, because of the manipulation of a psychologically crippled little people that had accepted the big lie upon which the postwar liberal order world governance maintained power.
So, instead of the truth that could have turned over the chess board we got the same polarities of mental chains like Jonathan Swift's Lilliputians fighting over chimeras of mental figments. The problem is that when we chase after these in order to finance a movement, we leave the truth behind. For in the end, it serves not to cater to backwardness rather than bringing the naked truth with its warts and all to light, for only then may we actually challenge humanity to look upon its foibles and start upon the painful yet healthful path of self consciously becoming aware. Without that any movement will necessarily come to nought.
Posted by Thingumbobesquire at 6:33 AM No comments:

What an execrable mess politics in America is these days.

Today we have a deployment of the agents of geopolitics via religious movements and institutions. On one hand, he Pope is all in on the Green New Deal/Great Reset. (See Biden and Pelosi...) On the other hand we  the supposed pro Israel/Jewish lobby as God's chosen people bringing the prophecy of Armageddon crew.

As if this weren't enough, we have the Tucker Carlson anti China operation on deck...

Oy vey. The times they are a changin...

Posted by Thingumbobesquire at 9:30 PM No comments:

Soon, the memories of the teachers that had their students drilled to crouch beneath their desks will be all but gone. For I am the ripe old age of near 68 and my teachers had to have been at the very least in their early twenties back then. The time of the duck and cover conditioning began in 1951, a decade before the "edge of destruction" Cuban Missile crisis. What did this do to our collective psyches? 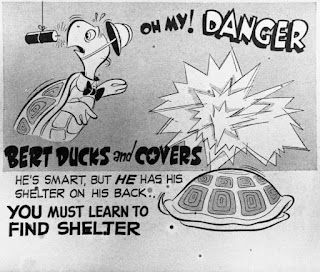 Jackson Pollock, a victim of Jungian psychotherapy, started his "drip period" at about the same time as the duck and cover psy-ops began. The CIA meanwhile started promoting this literal insanity on canvas as "modern art" of free expression against communism through it's sponsorship of Bertrand Russell led Congress for Cultural Freedom. Today, its successor organization is run by none other than George Soros, the financier of so called color revolutions around the globe. 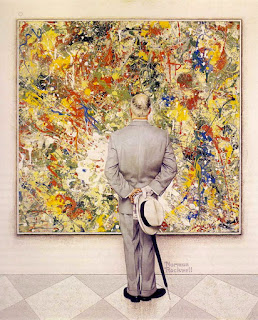 The next act was the foray into "research" of mind control via hallucinogens in the CIA project MK Ultra in or around 1953. Thus the irrationality of freedom could be minted a decade later as the counterculture of Timothy Leary's "Turn on, Tune in, Drop out"  mantra could be force fed to those same children that previously huddled beneath their desks for fear of nuclear obliteration. Cool... 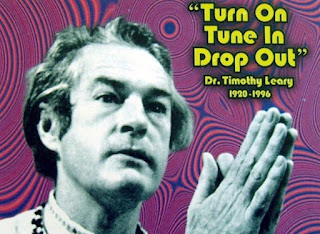 And now we are legalizing dope and criminalizing free speech in the "information age" of consumer "gig economy." Qui Bono? Who benefits? It ain't me babe...

Posted by Thingumbobesquire at 8:50 AM No comments:

Even in these benighted times, every once in a while there appears a glimmer of scientific genius that come almost like manna to salve one's despairing mentality. Today, in the midst of my wonted perusal of what passes for scientific inquiry, I came across a rather remarkable bit of hypothesizing about the molecular chiral organization of water.

In other words, water is so constituted that it conforms congruently to the essential property of organic chirality. Here we see the legacy of Pasteur. The anomalous boundary of living and inorganic afford us the precise vehicle to research what the leader of the true scientific approach, Leibniz clarified as the harmonic underpinning of natural law that makes the constitution of this world the best among all possibilities. And in doing so puts to rest for all but the most diehard blockheads among us that the ordering of our universe is, in potential, always characterized by an evolvability to higher levels of more order.
In this, we find consolation that our struggles to lay the groundwork for unremitting human progress will eventually bear fruit no matter how much those of ill will work to prevent it.
Posted by Thingumbobesquire at 5:41 AM No comments:

The Space Program's Benefit for Humanity in Its Universal Context

The Christian Humanist Renaissance held that that logos or the word, i.e. reason, being made flesh was understood that mankind was made in the living image of God the creator. And was given a new dispensation and right to uncover the laws of nature for the well being of future generations.

It is this type of love for humanity that inherently has a power that may not be overcome by any tyranny because it is based upon immutable truth. It has a power beyond all reckoning in the here and now because it unfolds continuously in time as scientific progress, yet is unbounded in the simultaneous sempiternal realm beyond time.

Thus it is that our better selves, each and every human on this planet, in principle, have a unique correspondence that resonates in harmony with the great mission and purpose for exploring and developing our civilization in space. It is in that particular sense that we are all united with our past hard-fought victory over lawless arbitrary rule of irrational oligarchies that would deny our real creative and universal identities.

This mission may not ever be defeated and eradicated unless humanity is no more. And this is the context with which everything that is occurring on the political stage of current world history must be strategically organized to bring about this one unifying and necessary future. All nations and all faiths, our science, technology and art can only come into congruence and peace by adopting and fulfilling its promise.

Posted by Thingumbobesquire at 5:34 PM No comments:

To The Grand Information Inquisition

If it be subversive to hear and see,
Then blot your pages from our eyes--
For our spirit still aims to flee
To thoughts above your cave of lies. 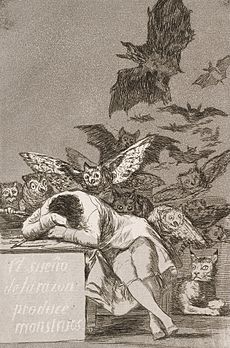 Francisco José de Goya y Lucientes - The sleep of reason produces monsters
Posted by Thingumbobesquire at 5:20 AM No comments: