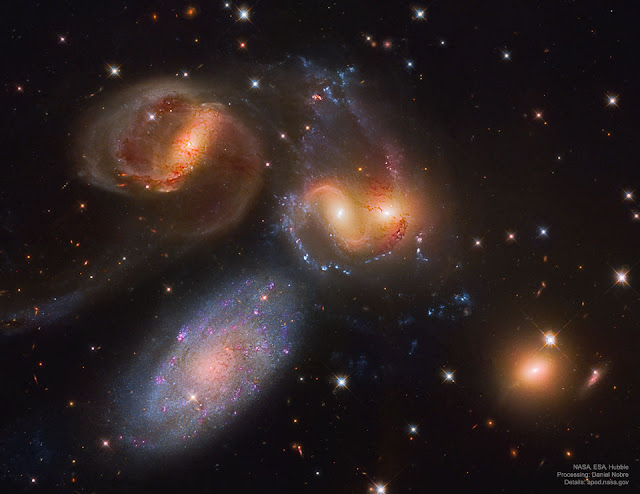 Before 1877 when Édouard Stephan discovered them, no human had witnessed even dimly these five galaxies, four of which had begun intermingling some billion years ago. Now they dance spectacularly before our eyes thanks to the Hubble telescope. My own grandparents were born at about that time of their discovery.

It is remarkable that such truly heretofore almost unfathomable power has been demonstrated and measured by the interplay of such vast galactic forces. And what power in that mere flicker of time has the progress of the human mind evinced? And yet we still find ourselves enmired in the dismal swamp of self imposed limits.

The old enemies of Prometheus are now cloaked in new garb. Their chains are unquestioned and false axioms that make mental slaves of us. They hate that higher sort of light of creativity to solve problems and inspire enduring beauty. They worship false gods.
Posted by Thingumbobesquire at 4:07 AM No comments: