The Lawful Composition of the Universe

Day in and day out we hear it being professed that entropic randomness is the underlying physical reality of all that exists. And indeed, if one were to marshal evidence to the contrary to a peer reviewed scientific publication it would be rejected. A variation of this theme is so called chaos theory whereby there is an "emergent" order somehow spontaneously generated out of the prevailing chaos.

I have fought continuously in these pages to maintain the opposite and to point to the psychology of the ruling conventional worldview. Whether or not anyone adhering to such an axiomatic schema for adjudging reality is aware of it, their worldview or Weltanshauung is equivalent to the arbitrary rule of the pagan pantheon. The gods are immortal and yet arbitrarily irrational in their ungovernable earthly passions. They demand human sacrifice in the worse case scenarios. A society cannot but crumble eventually that is held in thrall to such ghastly "principles." Entropy!

In fact, thank goodness, the reality is quite the opposite. As the great genius and founding father of the United States, Benjamin Franklin, wrote -- the reason for scientific inquiry and government is to Do the Good for the benefit of future generations. That is the essence of "the American dream." This worldview mandates that science have a long term mission orientation. In current terms, this means developing the means for alleviating poverty and disease, providing necessary infrastructure, fresh water and energy systems. The areas of investigation that cohere with this orientation are many. At their pinnacle however is the unifying mission for the human colonization of space. This is not optional; it is necessity.

Yesterday I came across a rather profound observation in my daily perusal of scientific literature:


"Recently, the pressure distribution in the proton was extracted for the first time from deeply virtual Compton scattering (DVCS) experiments at the Thomas Jefferson National Accelerator Facility (JLab) by Burkert, Elhouadrhiri and Girod [1] (henceforth referred to as BEG) over a limited kinematic range. The result is remarkable; it indicates that the internal pressure in a proton is approximately 1035 Pa, exceeding the estimated pressure in the interior of a neutron star."

This neatly illustrates the lawful ordering principle to which I refer. As Nicholas of Cusa and Leibniz developed in their dialogues, the Macrocosm and Microcosm are intimately and lawfully connected by the ongoing harmonious composition of this best of all possible worlds. 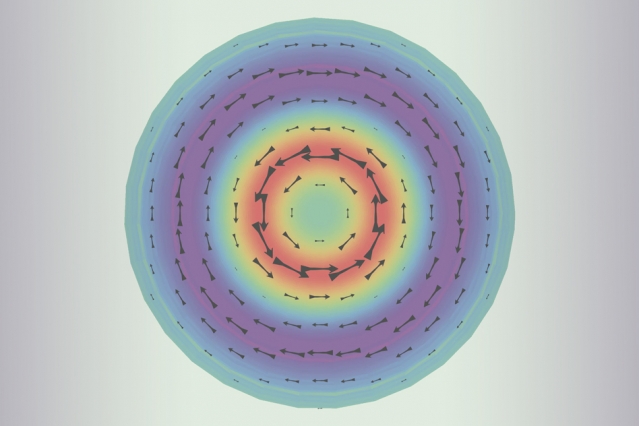 MIT physicists have calculated the pressure distribution inside a proton for the first time. They found the proton’s high-pressure core pushes out, while the surrounding region pushes inward.

Courtesy of the researchers
Posted by Thingumbobesquire at 3:54 AM No comments:

The recent finding by Johns Hopkins researchers that rhomboid enzymes travel beyond the cellular "speed limit" is illustrative of the unique manner in which biophysics is of a higher qualitative "dimension." That principle is of profound importance for the epistemology of science. For in dealing with space per se, we must distinguish from pure imaginary mathematical space and the functional living qualities of biophysical and noetic space and the interactions among these "realms."

As background, I recently posed the question of why humanity was at a kind of intellectual bottleneck or stultification on the issue of the planetary motions for centuries. One might be tempted to locate the answer in the necessary technological prerequisites not having been developed for accurate measurements of heavenly motions. However, this would be akin to missing the forest for the trees. Because the degrees of freedom required for society to break the bounds of prior constraining limits cannot be attributed to mere epiphenomena of a revolutionary change in its perspective underlying axioms.

The issue is that the historical mythological blinders imposed by the oligarchy were finally shattered enough to provide a freer rein to the creative potential of humanity. The classical Greek philosophers were certainly asking the right questions about hypothesizing the nature of planetary motions, inter alia, and most importantly the nature of the ruling ideological limitations of their society. What about the organization of their society allowed for a Socrates or Plato to so severely challenge the control of oligarchy?

Plato's dialog regarding the universality of human reason, The Meno, set the stage for what Augustine exemplified as the new dispensation. If a mere slave boy can recreate the most profound geometrical proofs independently of anything other than an internal dialog, the cult of the Pantheon of the gods must crumble and give way. The Promethean intellectual fire that the school of Athens lit would not be doused over the centuries, but reignite time and again in a ever yet more qualitatively powerful incarnation. 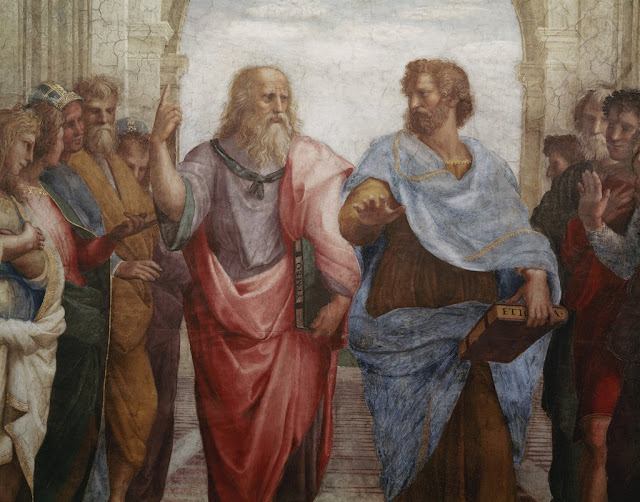 Posted by Thingumbobesquire at 4:58 AM No comments: