The Ugly and Perilous Mental Collapse of Barack Obama

This question for posterity (if there be any rational posterity worth speaking of): Why is it the case that the handlers of Obama desire to have a backdrop of adoring fans (which word by the way is shorthand for fanatics) vacuously smiling and nodding during his ubiquitous pep rallies? If, in your minds eye, you now place a montage of those images where Obama buoyantly bounces up the steps of the stage surrounded by these adoring made for television fans with his performance in his Waterloolike gaunt faced humiliating press conference where he intoned that "it's on me" that Obamacare is a wretched failure, what is your take away?

Isn't the answer that such handlers, leaving "The One" aside for the moment, had no idea on this good earth of how they would orchestrate a retreat for the great impostor? Which is to say that they were all drinking the same kool-aid that blinded them to realize what a self centered egomaniac said pretender truly is. What sort of euphoric state of mind, whether it literally be drug induced or not, could possibly be so arrogantly impervious to the reality that they were fronting for an odious and execrable piece of legislation?

All of which is a roundabout way of saying that when you sell your soul to Wall Street and pretend the opposite there just might be consequences. If we as a nation wish to regain any collective sanity we will forthwith "throw the bum out." The 25th Amendment regarding the medical incompetency of a President would amply suit the purpose. 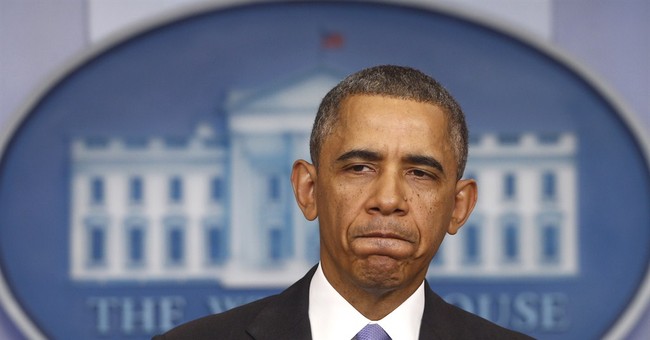 Update: It now seems that even O's human props are starting to turn on him. What is a vainglorious bought and paid for nonentity to do? Resign? Curses! Foiled again...

Posted by Thingumbobesquire at 12:05 AM