The Most Luminous Galaxy Has Been Hidden Until Now

The warning to abandon all axioms is once more reinforced by this recent discovery. "The galaxy, named WISE J224607.57-052635.0, is erupting with light equal to more than 300 trillion suns." But it is invisible to human perception because it is so obscured by dust that the light is only registered in the infrared portion of the spectrum.

Thus if we were to attempt to deduce from a "given" postulate this galaxy's existence, we would forever be in the dark. So much for Euclid and his acolytes like the benighted imperialist John Dee. Augustine's "corollary" to Paul's poetic declaration that we see as through a glass darkly must be remembered here: the Creator is not a clock winder or dead letter. The universal ongoing evolutionary potential is necessarily hidden from humanity's purview even as we co-evolve in a great fugue of discovery.

Beauty is in the irony of development, not in the object per se. Truth is not a "thing in itself." In the sempiternal realm above time we will truly see face to face. And that is what it is to be human. 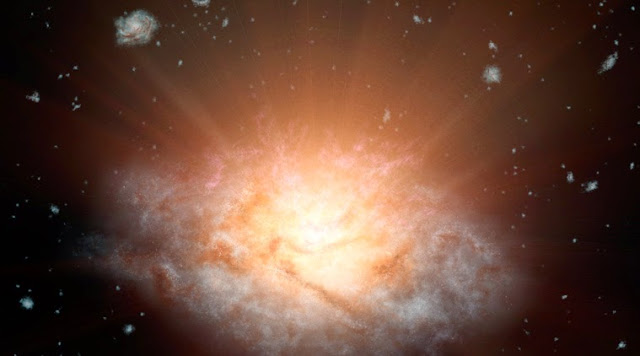 This artist's concept depicts the current record holder for the most luminous galaxy in the universe. The galaxy, named WISE J224607.57-052635.0, is erupting with light equal to more than 300 trillion suns. It was discovered by NASA's Wide-Field Infrared Survey Explorer, or WISE. The galaxy is smaller than the Milky Way, yet puts out 10,000 times more energy. (Source: NASA)
Posted by Thingumbobesquire at 6:00 AM