The Ongoing Relevance of the Methodolgy of Gottfried Wilhelm Leibniz

The importance of this study lies far beyond the surface issue of hearing. As the comparison for the visual cortex hints there is a unifying principle for the organization of the biological senses. On the level of ontology, the issue is whether the senses are a sort of blank slate or tabula rasa or as Leibniz demonstrated there exists a pre-established harmony at a higher level of organization. In Leibniz' New Essays on Human Understanding, he refutes John Locke's assertions that knowledge is derived from mere sense certainty. The underlying issue is one of the choice of scientific methodology. The ideology that science is the mere logical construct derived from sensory input is a crippling mental condition which undermines progress. The necessity for an overriding mission for humanity to continuously perfect its practice is the principle that today entails the our emergence as a space based civilization which can conquer manifold threats to our survival as a species in so doing. Indeed, without the contributions of Leibniz and co-thinkers, the development of physics which enables such a space based civilization would be impossible. For it was through Riemann's anti radical empiricism and  non Euclidean geometry, that the groundwork was laid for Einstein's theory of relativity. 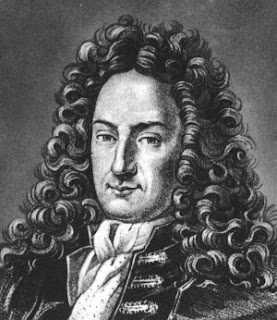 Posted by Thingumbobesquire at 4:18 AM