What Cusa Could Teach Us

In the End Is the Beginning
A daring theory of how the universe, instead of expanding indefinitely, could start again in another Big Bang.

In recent years, Roger Penrose has attracted a popular audience with thought-provoking books on physics, consciousness and the theory of computation, beginning with "The Emperor's New Mind" in 1989. But the work that established his status as one of the most remarkable mathematical physicists of our era was done in the 1960s and '70s. Along with Stephen Hawking, he developed mathematical techniques for studying the structure of the geometries that describe black holes and the Big Bang. These techniques allowed a precise characterization of the infinitely dense singularities found at the center of a black hole or at the moment when the expansion of the universe began.
With "Cycles of Time," Mr. Penrose has turned his attention back to the Big Bang and some of the seemingly imponderable questions it provokes: What came "before" the Big Bang, 14 billion years ago, and how might the universe it brought into being come to an end?
The currently accepted Big Bang model looks at what we can see of the past and projects this behavior into the future. Our best observations come from looking at patterns in the Cosmic Microwave Background (CMB), the thermal radiation that was produced 380,000 years after the Big Bang, at the time atoms formed and light could propagate freely. The manner in which the universe has continued to expand since suggests that, in the future, the universe will just keep expanding, with matter and radiation dispersing, entropy increasing and our fate a rather boring and lonely one to contemplate.
Many find unsatisfying this picture of the universe's distant past and future. First, it does nothing to answer the question of "what came before." Second, a universe that does something better than peter out would provide a more inspiring vision of our future. Mr. Penrose thinks he might have a better answer, which he calls "Conformal Cyclic Cosmology." The key words are "conformal" and "cyclic," and to explain Mr. Penrose's theory, it is best to take them in reverse order.
"Cyclic" indicates that the universe somehow circles back to a condition at which it could start all over again, in another Big Bang, an endless cycle of death and rebirth. Such cyclicity is a feature of several other recent speculative cosmological models, including some in which the Big Bang is just one of a sequence of collisions among multidimensional membranes or "branes."
"Conformal" refers to a particular type of geometry, which Mr. Penrose is a master of and which he thinks might explain why the universe won't merely keep expanding forever. (A geometry is said to be "conformal" if its properties don't change when it is transformed in a way that preserves angles but not distances.) Mr. Penrose's crucial point is that, in physics based on a conformal geometry, there is no way to characterize either distances or energy levels as "small" or "large."
Mr. Penrose points out that, as one goes back toward the infinite energy density of the Big Bang, the geometry of the early universe could in some sense be called conformal. Likewise, as one goes far enough into our distant, boring future, if everything turns into massless radiation, there's no usable energy scale—and the geometry is also conformal.
Mr. Penrose's radical suggestion is that, somehow, this distant past and distant future can be matched together, since they share the same geometry. A universe at either extreme of its existence is one that has no fixed ideas about what is big and what is small. Perhaps this curious coincidence indicates that one can pass continuously from one extreme to the other, and this transformation is what happened at the moment of the Big Bang.
Mr. Penrose does not write books that are, by any measure, easy to read. His 2004 book, "The Road to Reality: A Complete Guide to the Laws of the Universe," lived up to its title, with more than a thousand pages explaining how physics and geometry are interrelated at a fundamental level. To grasp everything in that book one needed doctoral-level training in mathematics or physics, but with a lesser background much of it was accessible.
That's also the case with "Cycles of Time." If his audience were merely specialists, Mr. Penrose could have outlined his speculative hypothesis in a few dense pages. Instead, he has included large amounts of background material designed to help anyone interested in the subject. The early chapters just about anyone should be able to follow, and much of the explanatory content is visual, embedded in wonderful drawings drafted in Mr. Penrose's own hand. But by the end, even experts will have trouble keeping up.
As Mr. Penrose acknowledges, there are various problems with his hypothesis. There is no real evidence that the universe will ever stop expanding, and it is unclear whether Mr. Penrose's use of conformal geometry can really solve that. As far as we know, electrons are stable, with unchanging non-zero mass. That means they will always be around to provide an energy scale, no matter how far out into the future one goes, ruining the conformal symmetry needed to ultimately match up with the Big Bang.
Another important question is whether Conformal Cyclic Cosmology could ever be tested experimentally. Mr. Penrose suggests only that we might observe some remnant structures in the Cosmic Microwave Background that have survived from the previous cycle. Readers should be forewarned that what they have in their hands is un-refereed research of a sort that may very well not pan out and convince other scientists. A surprising and unorthodox work disguised in the jacket of a popular science book, "Cycles of Time" should prove both deeply enlightening and just as deeply mystifying for anyone who dares to follow along.

The crux of the issue here truly lies within the province of metaphysics. As such, there has been no material improvement in the line of metaphysical dialog since Nicholas of Cusa essentially resolved Plato's Parmenides paradox with his work "The Non-other." The common reading of Cusa as a "Christian mystic" is a crass nominalist misreading of his influence that leads through DaVinci, Toscanelli (Christopher Columbus' mapmaker,) Leibniz, Gauss, and Bernhardt Riemann. The same Riemann whose formulation of n dimensional non-Euclidian geometry made possible Einstein's theory of relativity. The problem is that the overwhelming majority of today's apparently educated and degreed scientists and mathematicians have almost no familiarity with this... 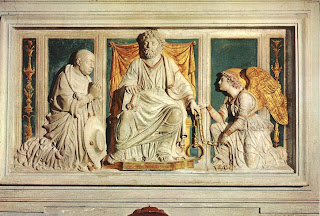 Posted by Thingumbobesquire at 8:03 AM