Anyone who has actually thought clearly about "Obamacare" has realized long ago that this is a corporatist scheme by insurance companies and Wall Street to increase their looting of America. Different packaging of the rationale for this corporatist looting is played to appease the prejudices of both left and right. For the left its all about compassion for suffering and right to die a dignified death. For the right its smaller government, lower taxes, and the right to "prosperity." Both roads lead to the same dead end...The problem with America's voting public is a lack of courage to unshackle oneself from the self imposed ideological blinders of such left versus right hogwash. Just as in Jonathan Swift's fable of the Liliputian wars over which side to crack one's egg, this ideology has been manufactured as a means of controlling the "debate." All the while the "too big to fail" criminal speculators  laugh all the way to their bailouts. 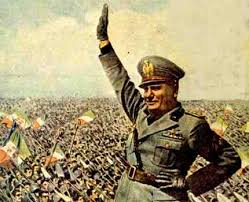 Mussolini the Corporatist
Posted by Thingumbobesquire at 5:02 AM