Einstein's principle of the invariant speed of light no matter what the relative motion is from the physical starting point from which that light emanates, indicates that time itself must be relative to this universally inherent quality of boundedness. The function of light, more broadly conceived as propagation of electromagnetic wave phenomena, varies relative to the type of bounding sphere (geosphere, biosphere, noosphere) as defined by Vernadsky, upon which it operates.

First, what Vernadsky labelled the geosphere or the inorganic realm is the result of the creation of elements up to iron by nuclear fusion in the furnaces of stars and heavier elements by shockwave explosions in supernovae (or perhaps other hitherto undiscovered inorganic processes.) The scale of time for the evolution of elements is only bounded by the age of the universe itself. In Riemann's philosophical notes we find musings upon the hierarchical relativity of time. He takes as his model Fechner's works on the Zend-Avesta. Fechner views the systems of stars as a higher form of a universal life principle. Vernadsky dismisses this as pantheism, or a form of world soul, purporting  to bestow consciousness upon the inorganic. However, I am more charitable toward Fechner's scheme. It is the case that inherent in the formation of planets from stars, the elements essential to life, and cosmic energy is embedded a principle of life. The question of whether this universal order is higher because it encompasses all of time and thereby all possibilities, or lower because it is merely inorganic dissolves when viewed from the standpoint of how technology may use the principle of fusion, matter anti-matter reactions, and other as yet undiscovered sources of energy/matter transformations. Seen from this perspective,that which Vernadsky denominates as the Noosphere, humanity noetically continues or recapitulates the process of creation in the sense that Nicholas of  Cusa gives as the Microcosm recapitulating the entire development of the Macrocosm.

Second, the photosynthetic property of light on the biosphere is the obvious transformation that leads to large scale evolutionary dynamics. We also now find that life thrives at the cellular level as thermophiles and extremophiles feeding from thermal and radioactive  radiation. For the biosphere, the addition of a directional sort of causality that involves a primitive sort of choice is manifest. The opposite chirality of the amino acid and sugar molecules evince this. It is quite remarkable that the ATPase mitochondrial motor that produces usable biological energy rotates either clockwise or counter  clockwise depending on whether the form of life is aerobic or anaerobic. Further, an ongoing quality of directness inheres in the evolutionary development of life forms that are able to capture and efficiently use more energy dense sources of nourishment. Thus, for Vernadsky, the biosphere is bounded by this evolutionary principle.

Third, the human creative interaction with light and radiative processes more generally, via technology shows itself in a multi-functional evolutionary way. At the dawning of civilization, epic poetry underlines the discovery  of fire from wood burning. This is the first in a succession of advancements in fuel sources that lift humanity's inventors into the role of self conscious directed evolution benefiting  unborn future generations. Just as fundamental to these epic poems is the invention of navigation via decoding the positions and movements of the light from stars. As LaRouche has shown, within any one mode of technology, there is posed a crisis for society through the using up of the relatively limited energetic resource. This is the the principle which by necessity bounds the proper functioning of the Vernadsky's Noosphere. Here for humanity, creativity and choice becomes a moral imperative for ensuring that we bestow on our posterity the capability to advance understanding and application of light understood literally and metaphorically. This power of continuous creation we can either willfully promote or deny. If we insanely and suicidally insist upon the primacy of the obligation to pay debt which has been manufactured by the machinations of the global monetarist oligarchy then we will have willfully doused this light. And a dark age will have justly be brought down upon us. On the other hand, if we defeat this monetarist cabal and their control, we can look to the future prospect of our species happiness through virtually limitless colonization of space. 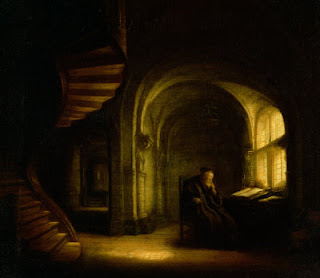 Posted by Thingumbobesquire at 7:16 AM