Contrary to the recent ignominious slander of Leonardo that he was not really a scientist, as a student of Luca Pacioli and Nicholas of Cusa he pushed the boundaries of many areas of research. Among these were his visually beautiful studies of vortical filament flows. 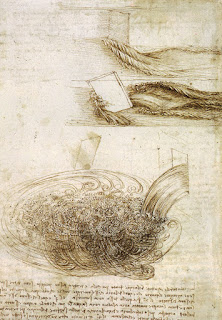 Therefore the just announced breakthrough that plasma corkscrew kink instabilities engender Rayleigh-Taylor instabilities that then result in the phenomena of reconnection that we see in solar flares is part of Leonardo's legacy. Thus, we must joyously commend Auna Moser and Paul Bellan for continuing in his footsteps. An argon plasma jet forms a rapidly growing corkscrew, known as a kink instability. This instability causes an even faster-developing behavior called a Rayleigh-Taylor instability, in which ripples grow and tear the jet apart. This phenomenon, the Caltech researchers say, has never been seen before and could be important in understanding solar flares and in developing nuclear fusion as a future energy source. Credit: A. L. Moser and P. M. Bellan, Caltech

Solar "Tornadoes"
Posted by Thingumbobesquire at 10:59 AM