Why Rembrandt and Not Mannerism Was the True Successor of Raphael

Just as Beethoven's breakthroughs in contrapuntal composition surpassed even the genius of Mozart, so too Rembrandt's mastery of ironical visual "entrainment" and allegorical use of light went beyond even the artistry of Raphael.

The Florentine Renaissance celebrated man as in the image of a living Creator or "Imago viva Dei." Thus the depiction of an aesthetic physical form for humanity akin to the sculptural Greek ideal of Praxiteles, et al. is quite harmoniously lawful. For the rebirth of such classical forms along with the method of Socratic dialogue from the vantage point of Christianity's opposition to the decadence of the Roman Empire is the essence of what motivated the towering contributions of Nicholas of Cusa. Raphael's opus captures the drama of this ongoing polemical stance of the challenge to the then oligarchical order in Europe.

Just as there was in music an attempt to escape from the zenith of Mozart and Beethoven's implicitly pro American masterpieces into mere showy apolitical chromaticism of Liszt, so the display of mere surface illusion of the Mannerists was the equivalent escapism in the visual art of that period.

This is why Rembrandt represented the continuation of Leonardo and Raphael's legacy. For he went further in developing a method of composition the evoked an inner light and beauty of humanity independent from mere outward formal beauty as it struggles to imitate that which is truly divine. 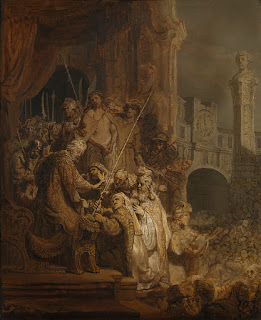 Posted by Thingumbobesquire at 7:35 AM