What Exactly Bounds the Universe?

Today a new controversy is swirling among the cosmological theorists. The fine structure constant actually varies continuously getting larger going from the northern to the southern universal hemispheres. Likewise, the polarization of electromagnetic propagation, or birefringence, has an axis in space.

However, looking here and there for anisotropies that characterize our universe brings to mind the principle of Poe's purloined letter. For the evidence that our universe undergoes continuous stages of structured development  in ever more perfect states is staring us collectively in the face. The workings of the human mind to transform a given state of nature over time via successive scientific revolutions is proof of this. This is the bounding principle of the universe. This is what Dante Alighieri saw at the pinnacle of creation. It is how Edgar Alan Poe ended his lecture called Eureka. It is the solution to Plato's Parmenides paradox. It is Nicholas of Cusa's principle of the Non Other. It is the Necessary Existent of Ibn Sina. It is Leibniz' Monadology. It is LaRouche's Non Entropic principle. 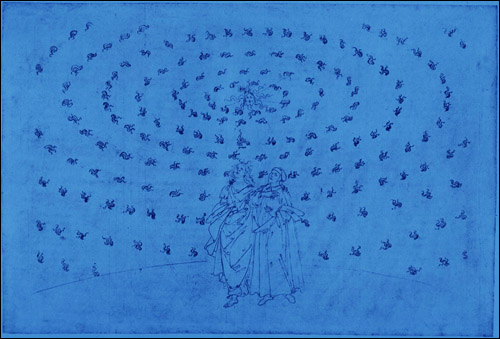 Posted by Thingumbobesquire at 4:44 AM