E. coli: The Legacy of Rachel Carson and Friends 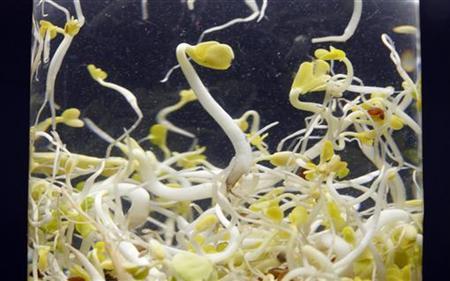 By Kate Kelland, Health and Science Correspondent
LONDON | Mon Jun 6, 2011 1:32pm EDT
(Reuters) - The warm, watery, organic growing environment suspected as the source of a deadly E.coli outbreak in Germany may produce delicious, nutritious bean sprouts, but is also an ideal breeding ground for the dangerous bacteria.
Bean sprouts are often prime suspects in E.coli outbreaks around the world, and health experts say it is no surprise the hunt for source of the lethal strain that has killed 22 people and made more than 2,200 sick has led to an organic bean farmer.
Some say the case raises questions about the future of organic growing methods.
"Bean sprouts are very frequently the cause of outbreaks on both sides of the Atlantic. They're very difficult to grow hygienically and you have to be so careful not to contaminate them," said Paul Hunter, a professor of public health at Britain's University of East Anglia.
"And organic farms, with all that they entail in terms of not using ordinary chemicals and non-organic fertilizers, carry an extra risk."
Hunter said he personally bought organic fruits and vegetables, but steered clear of organic raw salad foods "for precisely that reason."
The original source of the contamination in Germany is highly likely to be manure, farm slurry or faces of some sort, since the Shiga toxin-producing Escherichia coli or STEC found in this outbreak are known to be able to lurk in cattle guts.
SEEDS
The farmer at the center of Germany's outbreak has said he used no fertilizers, but scientists say the contamination may have been on or in the bean seeds themselves, in the water used to grow them, or have come from a worker handling the beans.
And once the bug was in, the conditions may have been perfect for it to reproduce.
"Bean sprouts are quite often grown at high temperatures, around 37 degrees (Celsius), and that is also the optimum growing temperature for E. coli, so it would allow any traces of it to multiply quickly," said Brendan Wren, a microbiology professor at the London School of Hygiene and Tropical Medicine.
"It's a 'perfect storm' scenario. It's rare and unlikely, but if all of these events happen then the produce could rapidly become contaminated."
Food poisoning cases linked to bean sprouts are not new.
In the United States in 1997, investigations into an outbreak of E. coli traced it back to alfalfa beans harvested in Idaho and then used for sprouting.
Stephen Smith, a lecturer in clinical microbiology at Ireland's Trinity College Dublin, said previous research in laboratories has shown that a type of E. coli that causes the life-threatening complication Hemolytic Uremic Syndrome, or HUS, can bind to alfalfa sprouts.
HUS often leads to kidney failure and has been one of the main causes of death and serious illness in the German outbreak.
"E. coli can stick tightly to the surface of seeds needed to make sprouts and ... lay dormant on the seeds for months," Smith said. Then, during germination, "the population of bugs can expand 100,000-fold."
WOMEN AGED 20-50 HIT
The suspicions about bean sprouts are strengthened by the pattern of infections, which are all in or linked to Germany, and by the distinctive age and gender profile of the victims.
In Germany and Europe, just as in the 1997 U.S. outbreak, most of those infected have been women aged between 20 and 50, a group not usually hard hit by E.coli outbreaks from other sources, which tend to harm children and old people.
Young women, more than other groups, tend to eat raw bean sprouts, believing them to be healthy, scientists say.
"The big issue will be for the bean sprout industry, particular the organic side," said Hunter.
"If you're growing these non-organically, you can separate them from feces in a way that is problematic if you are using organic production methods. Organic production of salad stuffs just may not be as safe as non-organic methods."
(Editing by Andrew Roche)

How very childish this environmentalist worldview is; as if evil "chemicals" were somehow not in "organic farming." Similarly, how do vegetarians reconcile themselves to all the microscopic animals that they ingest willy-nilly?
Posted by Thingumbobesquire at 1:07 PM