The Light of Time: A Theodicy of Sorts

"In addition to bringing some closure to the debate on the true speed of information carried by a single photon, the result that single photons cannot travel faster than the speed of light will also likely have practical applications by giving scientists a better understanding of the transmission of quantum information."

Leibniz proved Descartes' notion of force based upon momentum was all wet. Leibniz stood on the shoulders of Cusa, who proved that all in the finite world was necessarily limited in a precisely projective manner. Riemann working in this tradition, developed a proof of shockwaves for sound as it moved beyond the transmissabilty of a medium. Einstein, furthering this method of hypothesis, showed that for light, since there is no speed greater than itself, the mass at the shockwave is resolved, as it were, into energy. This takes us back to Leibniz' F=MA, thus translated into Einstein's  E=MC². The problem with looking at clock time and somehow attributing a false idea of transfer of information as a base 2, on off proposition, is that time as understood in human, distinctly noetic terms is relative to the continuing development of the perfection of technology. This is what Cusa developed as the progress of the non-other. The foregoing demonstrates that truthful ideas act forcefully across humanity's relative timeline forwards and backwards, in a fugal fashion well after their mortal progenitors are deceased to spur on scientific progress over centuries and indeed millenia. For it is no accident that the Renaissance proceeded from a Christian reworking of the Socratic method. 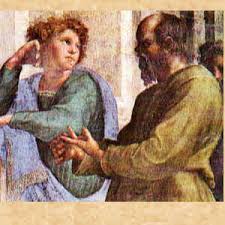 Posted by Thingumbobesquire at 5:11 AM