Our Financial Overlords and Aristotle's Definition of Art

If you wish to undergo the hardship of tuning into the sickening claptrap of Wall Street oracles on the Internet or television, you will hear the growing chorus of demands that the world must save the financial system by sacrificing the weakest of its members to more and more savage austerity. Thus, the pantheon of "superstars" of all that we are told by the selfsame mass media that we must worship as the measure of worldly success will be safeguarded. The 2 and sometimes 3-D colored pictures transmitted via a digital code to our latter day "cave walls" prove to us that this is the way of the world. After all, isn't all that can be seen with our own two eyes common sense reality? Or should we perhaps heed the lessons of "classical" antiquity and once more break free from the mentally self inflicted shackles that bring us to the present crisis?

But how can we solve this crisis if our very vision for futurity is the captive of and governed by nothing but ugliness?  Has it ever come to your mind that "human nature" will have to be elevated once and for all out of the superstition of its fearful obeisance to the powers that be if we are ever to bring about the exploration and colonization of space? Yet look at the Hollywood depictions of the future and what is there but the rankest fear mongering of "science" fiction? Why? What is it that has caused such forlorn and childish pessimism such that the vaunted and ordained "geniuses" of astrophysics can declare that alien civilizations would of course desire to eliminate humanity? What other than the worldview imposed by age old belief that we are ruled by the whims of unfathomable chaotic forces that can only at best be temporarily appeased?

That our "entertainment" must be restricted to a kind of purgative for our emotional disturbances in the face of such irrational fears that we mere mortals are "subject" to? And this "ideal" for "art," dear reader, traces back to  the subject of today's "blog": Aristotle. Everything that is deemed monetarily valuable as "modern art" today is nothing more than an extension of Aristotle's dogma of the apotheosis of the fear of the irrational. Of course, this doctrine did not originate with Aristotle, it is actually as old as the superstitious worship of the muck of "mother earth" in whatever "civilization" it rears its ugly head, be it Erde, Gaia, Isis, or Bhudevi. Ah, but it has its equivalence in supposed "Christian morality" as well. And it appears most starkly in the slavish worship of the invisible hand  magic of the marketplace, otherwise personified as (old) Adam Smith. For it was the Smith who so sententiously opined that ours is not to fathom the why and wherefore of the irrational and arbitrary passions that move history. "We cannot foresee the consequence of these, only god (sic) may do so. Why it would be hubris to suppose otherwise, would it not? Nay, we may only know that the frailties of human nature will ever be such and learn to profit (quite richly) from that knowledge." 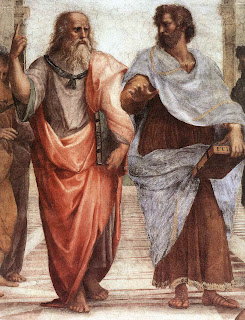 Raphael's Polemic of Plato versus Aristotle: Beauty in Truth or Irrational Fear? 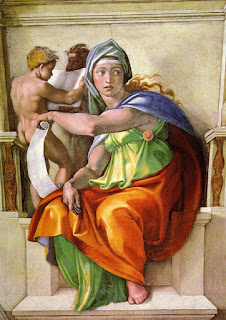 Michelangelo's Paean to the Superstition of the drugged up Delphic Sibyl

Leonardo (who is honored as Raphael's model for Plato above) humorously condemned Michelangelo's  representation of the human form for its resemblance to a bag of walnuts!

Posted by Thingumbobesquire at 6:37 AM