The tool that Bernhard Riemann adopted of n+1 multiply connected manifold affording an instance of a kind of phase space degree of freedom is really but a mathematical metaphor for the underlying reality of ongoing non linear development of the universe. It is therefore quite disheartening to see the gruesome distortion that the Royal Society's so-called M Theory makes of supposed extra dimensional strings. These folks seem to have gone down the proverbial rabbit hole of Lewis Carroll and never come back. The very same Lewis Carroll who was in reality as Charles Dodgson a dedicated hater of the revolution that Riemann and collaborators created.

Today I came across a remarkable work of mathematical biophysics that for most layman would seem utterly incomprehensible.It is the development of method for mapping the non linear molecular motion of protein "metadynamics in the conformational space nonlinearly dimensionally reduced by Isomap."


However it is in essence no more mysterious than Brunelleschi's building of Il Doumo in Florence or his revolutionary development of perspectiva in the fifteenth century.

I have for some time now on this blog remarked that the quality of multi-dimensional connectedness of biophysics is uniquely suited for a treatment by Riemannian methods. The manner in which biophysical processes known as proteins interact on the level of the "proteome" wonderfully illustrates this. It has further been my keen interest in certain anomalous types of phases of living, non living, and intellectual substance that has led me to share new examples in these pages with you. The model of the way in which in Renaissance emerges from a dark age in the history of humanity I have likened to a shockwave that is meta-stable in acting upon economy and culture. It is analogous to a long lived soliton in its power to transform the practice and thinking of humanity. The creation of the radically new and singular occurs as a culmination of a lawful development of preceding ideas. The closest we can come to the emotion associated with this is in the music of Beethoven, especially his Fidelio Overture No. 3 conducted by Furtwangler, late quartets and piano works.


I find the fact that the network of molecular motions illustrated from the referenced paper is in the form of a horn torii is lawful. This is precisely what I have hypothesized as a model for non linear development  in these pages. If this direction is synthesized with the class of higher least action Abelian physical functions, one of which called the catenary that the aforementioned Brunelleschi used to solve the construction, then humanity may once again create a Rennaisance out of the current nightmarish abyss into which we seem to be hurtling like a somnambulist. 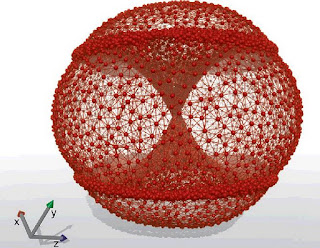 Three-dimensional Isomap embeddings of trans,trans-1,2,4-triﬂuorocyclooctane. Each ball represents one of 8375 conformations of the molecule. Each conformation was connected to ten nearest neighbors (measured as RMSD) to form a graph, which is shown as sticks. Threedimensional Isomap embeddings were obtained by multidimensional scaling of pairwise geodesic distances between points measured as the shortest paths on the graph. Isomap embedings were rotated by angle (0.00, 2.40, –0.55 rad) for better clarity

Posted by Thingumbobesquire at 7:13 AM