The Power of Mind

I came across a report on a rather fatuous "psychological study" today entitled "Why Aren’t We Smarter Already: Evolutionary Trade-Offs and Cognitive Enhancements" Beyond the errant lack of understanding of the ontology of truly human creative thinking evident here, I wish to direct the readers attention to larger implications of the issue of what is mind versus brain. The fancy that a mechanical system's performance (i.e. the brain) at ever greater velocity is the equivalent of intelligence is an almost ubiquitous fallacy fervently "worshiped' via the influence of the "entertainment" and "Internet" media today. What would Jonathan Swift make of the television game show quiz genre but a risible replay of what he polemicized against as the whipping up of a false quasi-religious zeal?

In the Raphael's political mural the School of Athens, Socrates has been "reincarnated" as Leonardo da Vinci. The display of the two juxtaposed "visions" of mankind's purpose is wonderfully at play in the painting. Aristotle points to the world of sense impressions for the basis of mere "understanding." (Rembrandt later painted a sort of  ironic supplement to this depiction by showing Aristotle rather blindly "contemplating" the bust of the physically blind but truthfully and glowingly visionary Homer.) This is the selfsame Aristotle whose doctrine of "beauty" in theater stands for a kind of purging of one's emotional bowels. Mental feces have never been more apotheosized than this (even by the followers of Baudelaire)... But, of course, like the accusers of Socrates' sacrilege, Aristotle was worshipful of the oligarchy. The cringing belief in the all powerful and unfathomable chaos of arbitrary "governance" by an irrational and terrifying elite. (Much like today's popular "music" or "Hollywood.") 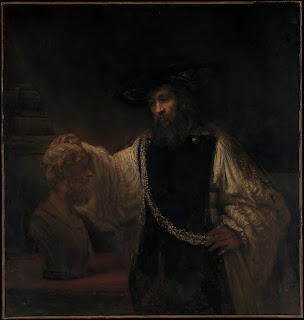 Contrast the way in which the cunning cleverness of a modern day Iago, the "beknighted" Henry Kissinger is basely revered and hailed by the "talking heads" as the great doctor with the commonplace idea of "smarts"  implied in the title of the subject at hand here. Dear reader, are you also too blinded and dazzled by this contentless muck of bowing and scraping subservience to today's would be oligarchy not to notice that the truly creative power of mind is of an ongoing infinite and evolving beauty? Look to the uplifting heavens then as Socrates points upward in metaphor. Relive in your mental recreation of Raphael's wonderful depiction of the conflict between arbitrary rule of irrational fear or in imitation of the love of the harmonic mission of humanity to conquer an ever unfolding problem of survival of mortality as it moves out off this planet. Posted by Thingumbobesquire at 1:49 AM